All things are possible for one who believes – Mark 9:23

We are hugely proud of the sporting accolades and recent success that the children at Waverley Abbey have achieved. Due to the number of children at the school and the amount of sporting opportunities on offer, the school has developed an enviable range of sports facilities over recent years, all for the children to use and benefit from, both in lessons and representing the school in sporting teams.

The school is situated in beautiful countryside and we are fortunate enough to host a large playing field which covers over 2 acres. The school field provides a safe environment for all the children to play in whilst also being large enough to host a variety of sporting events.  We regularly host and organise a Year 5 and 6 football tournament in the spring, where up to 14 schools come and compete against one another.  In the summer term we host and organise cricket tournaments as well as an upper school rounders’ tournament.

At Waverley Abbey we believe that Sport is for all and we encourage every single child to get involved with representing the school in a sporting context.  This could be in a school team or taking part as one of our runners for our autumn/spring district sports cross country event that takes place at Farnham Park.  Each year we try and get more runners than the previous year.  As well as participating in a team, Waverley Abbey have Year 6 Sports Leaders, who take an active role in leading sports events, run lunch time clubs for younger year groups as well as organise equipment for all children at break times. We believe that this role is incredibly important and is now an integral part of our school life.

At Waverley Abbey, we also provide a wide range of opportunities for a large number of children to represent the school in “B” and “C” teams as we believe that all sporting experiences are valuable in enriching their lives.  Waverley Abbey has now achieved the Gold Sainsbury’s Platinum Mark Award for 2018-2019.  This has only been achieved once the school has achieved Gold Mark 4 years in a row.  This scheme rewards schools commitment and development to competition, participation and recognises the excellent provision that Waverley Abbey provides for all its children.

The first Farnham and District Schools Year 6 Girls’ Football Competition has been taking   place over the past few months at Weydon School on a Friday evening. The Cup final took place on Friday 8 November, with Waverley Abbey School beating William Cobbett School 2-0, in a tense, exciting final. Waverley Abbey School dominated possession and created many goal scoring opportunities but it was William Cobbett that came closest to scoring in the goalless first half. Mid-way through the second half Waverley scored with a couple of great finishes, giving the inspired William Cobbett keeper no chance of stopping. Even then, William Cobbett had time for a couple of near misses, which if one attempt had gone in would have resulted in a very exciting final few minutes.  Waverley Abbey are now crowned Farnham Junior District Girls Champions 2018-19.  Waverley Abbey Girls B team also qualified for the Plate Final by beating South Farnham 5-4 in a penalty shoot-out, but despite showing great battling qualities and team-work in the final, found St Peter’s A team to be a bit too strong. 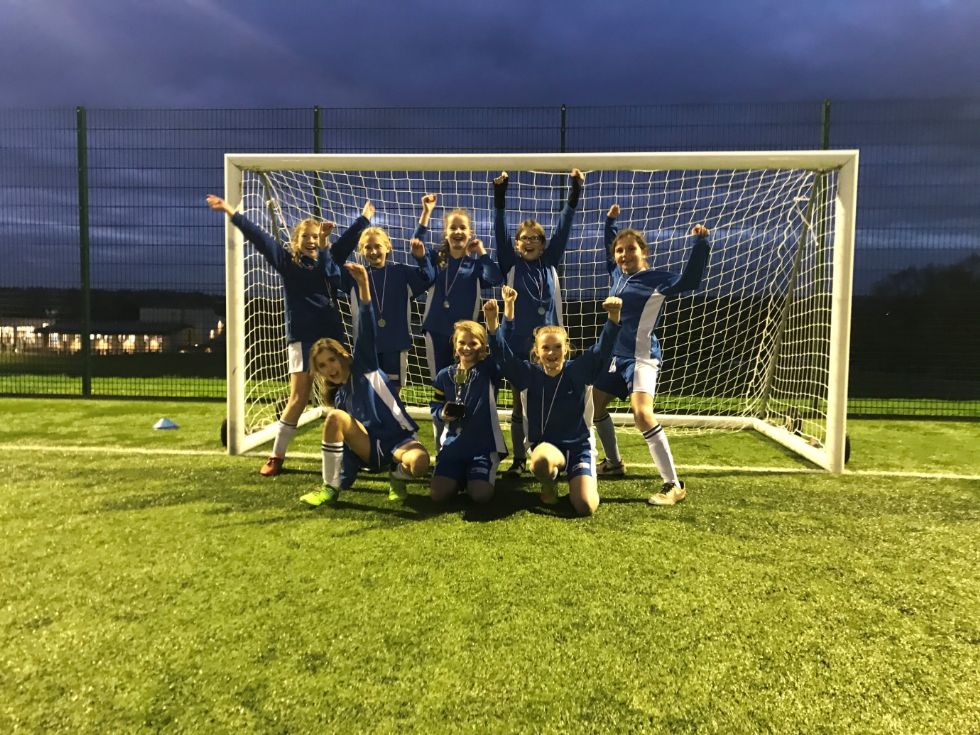